How the Recursive Feature Elimination Affects the SVM and RF for Wildfire Modeling? A Mountainous Case Study Area

Home Publications How the Recursive Feature Elimination Affects the SVM and RF for Wildfire Modeling? A Mountainous Case Study Area 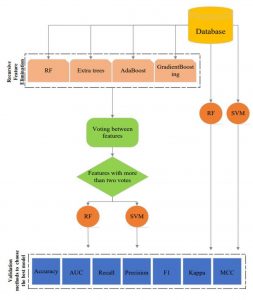 A flowchart of the proposed method for wildfire susceptibility prediction.

This study aims to identify key fire factors via recursive feature elimination (RFE) to generate a forest fire susceptibility map (FSM) using support vector machine (SVM), and random forest (RF) models. The fire zones were derived from MODIS satellite imagery from 2012 to 2017. Further validation of these data has been provided by field surveys and reviews of land records in rangelands and forests; a total of 352 fire points were determined in this study. Seventeen factors involving topography, geomorphology, meteorology, hydrology, and anthropology were identified as being effective primary factors in triggering and spreading fires in the selected mountainous case study area. As a first step, the RFE models of the RF, Extra trees, Gradient boosting, and AdaBoost was used to identify important fire factors among all selected primary factors. The SVM and RF models were applied once on all factors and the second on those derived from RFE models as the key factors in FSM. Training and testing data were divided tenfold, and the model’s performance was evaluated using cross-validation (CV). Different metrics were used to measure accuracy, including recall, precision, F1, accuracy, the area under the curve (AUC), Matthews correlation coefficient (MCC), and Kappa. The accuracy assessment process shows that the FSM results are further improved by leveraging RFE models to distinguish the key factors and not include unnecessary factors. The greatest improvement is for SVM, with more than 10.97 % and 8.61 % in the accuracy and AUC metrics, respectively.