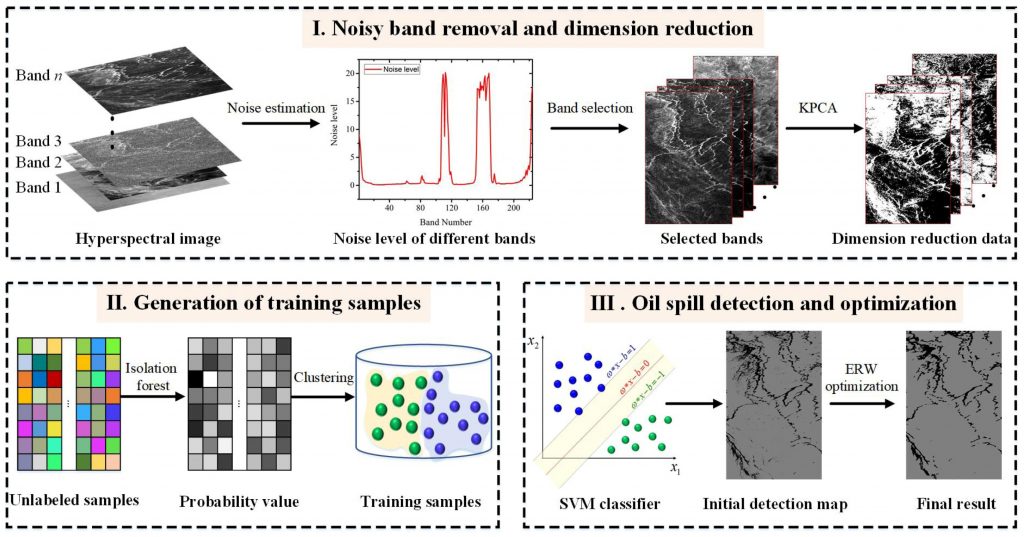 The flowchart of the proposed unsupervised oil spill detection method.

Oil spill detection has attracted increasing attention in recent years since marine oil spill accidents severely affect environments, natural resources, and the lives of coastal inhabitants. Hyperspectral remote sensing images provide rich spectral information which is beneficial for the monitoring of oil spills in complex ocean scenarios. However, most of the existing approaches are based on supervised and semi-supervised frameworks to detect oil spills from hyperspectral images (HSIs), which require a huge amount of effort to annotate a certain number of high-quality training sets. In this study, we make the first attempt to develop an unsupervised oil spill detection method based on isolation forest for HSIs. First, considering that the noise level varies among different bands, a noise variance estimation method is exploited to evaluate the noise level of different bands, and the bands corrupted by severe noise are removed. Second, kernel principal component analysis (KPCA) is employed to reduce the high dimensionality of the HSIs. Then, the probability of each pixel belonging to one of the classes of seawater and oil spills is estimated with the isolation forest, and a set of pseudo-labeled training samples is automatically produced using the clustering algorithm on the detected probability. Finally, an initial detection map can be obtained by performing the support vector machine (SVM) on the dimension-reduced data, and then, the initial detection result is further optimized with the extended random walker (ERW) model so as to improve the detection accuracy of oil spills. To evaluate the performance of the proposed approach, we create a database, containing eighteen hyperspectral images with oil spills captured over Gulf of Mexico in 2010, entitled airborne hyperspectral oil spill data (HOSD). The obtained results demonstrate that the detection accuracies achieved by the proposed method have been increased by 21.14 percentage points and 33.29 percentage points in terms of area under curve (AUC) and detection precision (DP) in comparison with other state-of-the-art detection approaches. HOSD and our developed library for oil spill detection are available on GitHub to further promote this research topic.