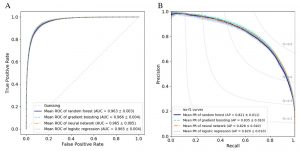 The ability to predict transfusions arising during hospital admission might enable economized blood supply management and might furthermore increase patient safety by ensuring a sufficient stock of red blood cells (RBCs) for a specific patient. We therefore investigated the precision of four different machine learning–based prediction algorithms to predict transfusion, massive transfusion, and the number of transfusions in patients admitted to a hospital.

This was a retrospective, observational study in three adult tertiary care hospitals in Western Australia between January 2008 and June 2017. Primary outcome measures for the classification tasks were the area under the curve for the receiver operating characteristics curve, the F1 score, and the average precision of the four machine learning algorithms used: neural networks (NNs), logistic regression (LR), random forests (RFs), and gradient boosting (GB) trees.

Using our four predictive models, transfusion of at least 1 unit of RBCs could be predicted rather accurately . Using the four methods for prediction of massive transfusion was less successful. As a consequence, prediction of the total number of packed RBCs transfused was also rather inaccurate.

This study demonstrates that the necessity for intrahospital transfusion can be forecasted reliably, however the amount of RBC units transfused during a hospital stay is more difficult to predict.