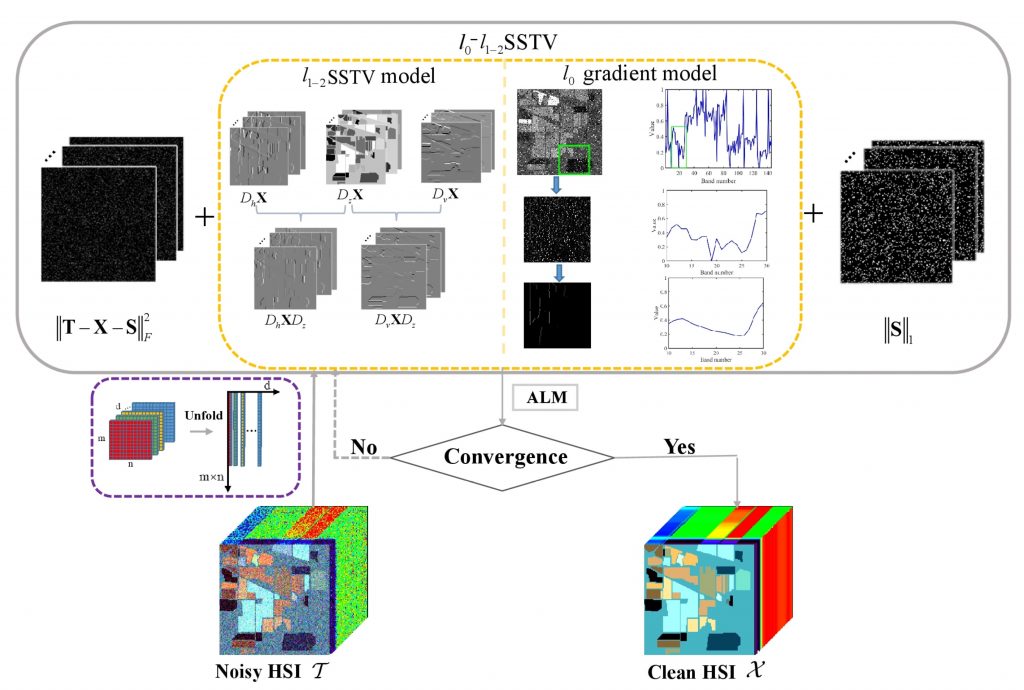 Overview of the proposed method.

Hyperspectral images (HSIs) are usually corrupted by various types of mixed noises, which degrades the qualities of acquired images and limits the subsequent applications. In this paper, we propose a novel denoised method based on a hybrid spatial-spectral total variation (SSTV) regularization, which we refer to as l0-l1−2SSTV. Specifically, l0-l1−2SSTV can be treated as an integrated regularization embedding spatial-spectral l0 gradient model into l1−2SSTV.  l1−2SSTV regularization exploits the sparse structures in both spatial and spectral domains. Hence, the correlations within HSIs are fully considered. Due to the good performance of l1−2-norm in image restoration, l1−2SSTV gives a tighter approximation for the gradient domains of HSIs. It can effectively avoid artifacts and over-smoothing caused by the limitation of the SSTV regularization based on l1-norm (l1SSTV). Meanwhile, the l0 gradient regularization controls the number of nonzero gradients to promote the local piecewise smoothness, making denoised images preserve clear edges. With the effective combination of l1−2SSTV and l0 gradient regularization, l0-l1−2SSTV produces high-quality restoration results in the denoising process: better detail preservation and sharper edges. The augmented Lagrangian method (ALM) and the difference of convex algorithm (DCA) are exploited to optimize the proposed model. The results for simulated and real experiments demonstrate the effectiveness and superiority of the proposed method compared with state-of-the-art methods.