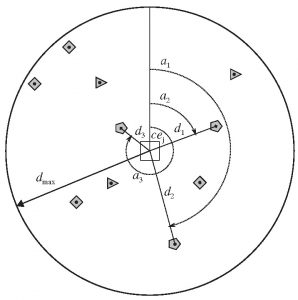 Calculating feature vector for a grid cell cej based on geo-objects within a cutoff distace dmax.

Urban growth is a complex spatial process that has a significant impact on the earth’s environment. It is affected by many non-linear factors and irregular flows of population and economy. Predicting urban growth helps minimizing urban sprawl and enables sustainable urban development. It is, however, a non-trivial task as it requires identifying and modeling the relevant factors. Here, we present a new method of urban growth prediction based on geospatial semantics.

We used semantically annotated geo-spatial vector data from LinkedGeoData. The dataset includes multiple classes of geo-objects, such as points of interests, streets and buildings, organized in a tree structure. A raster dataset from the Copernicus project describing evolution of urban and non-urban areas over several years provided the ground truth information. These data were used to train and validate our model in specific locations scattered over Europe.

The selected regions were divided into a grid of spatial cells of 20 m x 20 m. We defined four classes describing changes between urban and non-urban areas, and added the corresponding label to each cell. For each cell, we computed a feature vector based on geo-objects within a certain distance from the cell. To investigate the effect of the cutoff distance on the prediction accuracy, we considered a range of cutoffs between 20 m and 30 Km. We trained the multilayer perceptron (MLP) neural network and evaluated the accuracy using 10-fold cross-validation. We tested several MLP architectures and selected the one with four hidden layers, which scored the best results.

The results show that including geospatial semantics significantly improves the prediction accuracy, in particular for urban areas. The advantage of our method is that it automatically determines which geospatial features are more relevant for the specific urban area. The proposed method thus enables the prediction of urban growth with high accuracy.