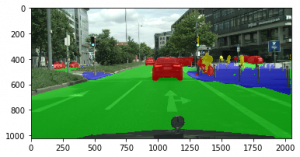 Deep neural networks are an increasingly important technique for autonomous driving, especially as a visual perception component. Deployment in a real environment necessitates the explainability and inspectability of the algorithms controlling the vehicle. Such insightful explanations are relevant not only for legal issues and insurance matters but also for engineers and developers in order to achieve provable functional quality guarantees. This applies to all scenarios where the results of deep networks control potentially life threatening machines. We suggest the use of a tiered approach, whose main component is a semantic segmentation model, over an end-to-end approach for an autonomous driving system. In order for a system to provide meaningful explanations for its decisions it is necessary to give an explanation about the semantics that it attributes to the complex sensory inputs that it perceives. In the context of high-dimensional visual input this attribution is done as a pixel-wise classification process that assigns an object class to every pixel in the image. This process is called semantic segmentation.

We propose an architecture that delivers real-time viable segmentation performance and which conforms to the limitations in computational power that is available in production vehicles. The output of such a semantic segmentation model can be used as an input for an interpretable autonomous driving system.